Marriage is a voluntary, private contract between two adults. While it is a personal and emotional commitment, it is also a legal relationship that changes the legal status of both parties. A family law attorney from Law Office Of Curtis R. Cowan in Fort Lauderdale, FL, can help you to understand the legal technicalities of marriage.

The legal rights and obligations associated with marriage have evolved with our society and today are the same for both spouses. Each state has its own rules about marriage, but there are some uniform principles, including:

There are numerous legal benefits to marriage. There are both federal and state laws available only to married people. Other benefits include Social Security benefits, inheritance rights, property rights, the ability to sue third parties for the wrongful death of a spouse or loss of consortium, and the right to make medical decisions on a spouse’s behalf.

Many couples believe they will achieve a common law marriage and be entitled to the legal benefits and obligations of married couples if they live together for a significant period of time. It is not quite that simple. Each state defines the requirements that must be met to legally qualify as married. Generally, a common law marriage is recognized when a heterosexual couple lives together in a common law marriage state for a significant period. Among the states that recognize common law marriage, none define the time period, but typically a ten-year-old relationship is required. The couple must also have the intent to be married, which is generally measured by whether or not the couple presents themselves to the public as a married couple. Evidence of the necessary intent includes sharing the same last name, filing joint tax returns and referring to each other as husband or wife.

Couples who are considering marriage or living together may benefit from talking to a family law attorney about the advantages of a premarital agreement (also called prenuptial agreement or antenuptial agreement) or a cohabitation agreement. Although not very romantic, premarital agreements are a useful tool for defining the legal relationships between two people, particularly as they relate to property. Generally, the intent of the agreement is to create a framework for handling money and property issues during the marriage or relationship and to create a roadmap for property division should the relationship eventually terminate.

Each state has its own laws about what can be included in a premarital agreement. Most states will not uphold agreements about child support and will not uphold agreements that were created fraudulently or unfairly. A number of states have also adopted the Uniform Pre-Marital Agreement Act. The Act dictates how premarital agreements should address property ownership, control, and management during the marriage and how property should be divided upon separation, divorce or death.

Getting married is one of the most important things people do. Hopefully, it reflects a deep emotional commitment because it also truly changes the participants’ legal statuses. By understanding your rights and obligations as a married person you may more fully appreciate the step you are taking. Before you marry or move in with your partner, consult a family law lawyer at Law Office Of Curtis R. Cowan in Fort Lauderdale, FL, to identify any future issues that you need to resolve now to keep you and your beloved on the path of matrimonial or relationship bliss.

DISCLAIMER: This site and any information contained herein are intended for informational purposes only and should not be construed as legal advice. Seek competent legal counsel for advice on any legal matter. 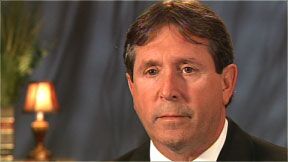 I am a Board Certified Marital and Family Lawyer and certified mediator with more than 29 years of experience in this field. As a solo practitioner, I am accessible to the clients I serve in and Broward County. Contact my Ft. Lauderdale office at
(954) 953-2575

I am a Board Certified Marital and Family Lawyer and certified mediator with more than 30 years of experience in this field. As a solo practitioner, I am accessible to the clients I serve in and Broward County. Contact my Ft. Lauderdale office at (954) 953-2575

Curtis R. Cowan represents divorcing couples and parents in all aspects of Florida divorce and family law. Based in Fort Lauderdale, our practice serves men and women (and the best interests of their children) in Palm Beach and Broward counties. Call us today for more information about our philosophy of practice and how we can help you come to an amicable agreement or assert your rights in litigation. 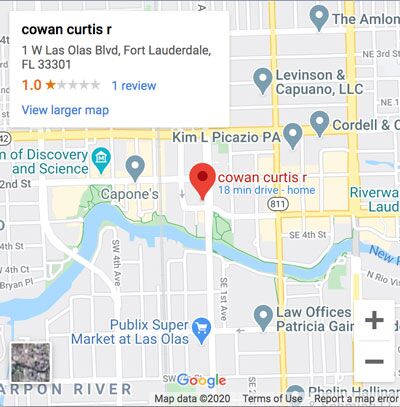 The use of the Internet or this form for communication with the firm or any individual member of the firm does not establish an attorney-client relationship. Confidential or time-sensitive information should not be sent through this form.

Let my experience in Florida divorce and family law work to your advantage. As your legal counsel or as a certified mediator, I can guide you to efficient, cost-conscious out-of-court settlements in most matters.